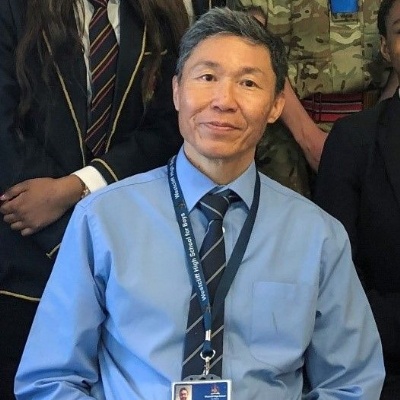 Earlier this week, it was my sad duty to share with pupils and the wider WHSB community that Mr Ed Tsang, Mathematics Teacher, passed away whilst awaiting a liver transplant at Addenbrooke’s Hospital.

Mr Tsang joined WHSB on a part-time basis in September 2017, following his retirement from Westcliff High School for Girls (WHSG) where he served with distinction for 30 years.

I was delighted when Mr Tsang agreed to join the staff of WHSB in 2017. I already knew Mr Tsang by his reputation as one of the finest Mathematics teachers around. Indeed, on the recommendation of one of Her Majesty’s Inspectors of Education, Mr Tsang was nominated and appointed as an accredited Advanced Skills Teacher in 1999. In that role, and with the support of WHSG, he spent a significant amount of his career training other local teachers in both primary and secondary schools. In doing so, he contributed significantly to an improvement in the quality of Mathematics education received by many pupils in the local area.

In recognition of his outstanding work as an Advanced Skills Teacher, the Local Authority sponsored Mr Tsang to undertake a Master’s Degree in Education which he completed in 2012. A highly intelligent and capable person, Mr Tsang was also co-opted to the Senior Leadership of WHSG and was responsible for a number of highly successful initiatives, including the development of international curriculum projects.

Those pupils fortunate enough to be taught by Mr Tsang know that his passion for his subject was boundless. He prided himself on finding new and innovative ways to enthuse pupils and always sought to build their confidence in their own abilities. Like all great mathematicians, Mr Tsang was a natural problem-solver and even the most faint-hearted pupil of Mathematics would leave Mr Tsang’s lessons feeling they could progress in the subject. It was his gift as a teacher to inspire confidence, and many pupils of WHSG and WHSB owe their success in Mathematics and problem-solving to Mr Tsang’s excellent teaching.

Of course, Mr Tsang’s pupils learnt more than just how to use their mind well in his lessons. They also learnt much from him regarding personal resilience. Mr Tsang felt strongly that he (and all teachers) should encourage pupils to embrace challenges and never to be despondent in the face of failure. As he once noted to me, ‘I have rarely come across a pupil who has given up on a computer game just because they failed to solve it the first time, so I see no reason why Mathematics should be any different’.

Mr Tsang was a warm, kind and naturally optimistic man. He was full of wit and good humour and always sought to encourage and support those around him. He was a highly experienced and gifted individual and I thoroughly enjoyed our numerous conversations. Never a week went by without Mr Tsang mentioning something or someone to me that, in his opinion, made the School a wonderful place to work. He would often voluntarily exceed his contracted hours and sit down with students in the Sixth Form building to provide support and guidance with A Level Mathematics problems. He also supported the School’s extra-curricular life, setting up enrichment activities, including a Sixth Term Examination Paper (STEP) Club and a specialised Mathematics Library.

We are deeply saddened by Mr Tsang’s passing and we will miss him greatly. Yet we take heart from having had the privilege of knowing him and working with him. He leaves us with a rich legacy and his positive influence will be felt by many at WHSB and in the wider community for many years to come. Our thoughts and best wishes go to his family at this difficult time.