Another Successful Wargaming Year for WHSB 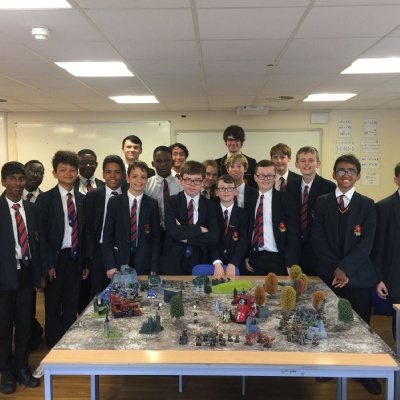 The Wargaming Club at Westcliff High School for Boys is one of the longest running extra-curricular clubs at the School, attracting pupils from all Year groups.

Those who participate play both recreationally and competitively.  For the last three years, the School has entered a team in the national Schools’ League tournament for Warhammer 40000, a table-top strategy game manufactured by Games Workshop.  Set in the 41st millennium, Warhammer 40000 sees a stagnant human civilisation beset by hostile aliens and malevolent supernatural creatures.

This academic year’s Schools’ League tournament was based on the stand alone “Warhammer 40000: Kill Team” arena, pitting the next generation of Warhammer players against one another.  The Westcliff High School for Boys team, comprising Alexander Fall (Year 12), Max Allsopp, Samuel Hughes, Sean Wright (Year 11) and Charlie Wright (Year 10), all competition veterans with previous tournament experience, sailed through to the finals.  After facing some tough competition from other schools, the WHSB team were placed fourth overall in the UK.

The students are extremely proud of their progress and achievements this year and look forward to competing in future competitions.